I used to think that art was eternal, that being an artist made you immortal. But I’ve come to realize that who and what gets remembered is often haphazard. Books are forgotten. Film reels are destroyed. So little survives.

James Young directed a 1926 silent film called The Bells, starring Lionel Barrymore and Boris Karloff. In 2003, Bill Morrison reconstructed a surviving nitrate print of the movie into a new short film, adding a soundtrack by Bill Frisell. The print is damaged, creating a fascinating distortion of the images. Faces blur. Splotches dominate many of the scenes, though there is still a story that you can follow. Morrison calls his film a “revision” of Young’s original.

In Morrison’s film, Lionel Barrymore plays a character who, on Christmas,  kills a Jewish man for his money. Boris Karloff is a mesmerist who tries to get Barrymore to confess his grisly crime. Morrison destabilizes the narrative by editing Young’s original scenes together in a way that suggests that much of what we are seeing is a dream. By the end of the film, we don’t know what is real and what is not.

The early silent films have a unique beauty about them. It’s still shocking to see a person from 100 years ago so alive. Death seems impossible. Here are Barrymore and Karloff moving right before us. We can almost touch them. They can’t be dead. Film has preserved them, made them immortal.

But, as we watch the film and see the reels degrade, the men seem to be in the process of dissolving. The damage to the nitrate creates distortions in the film, almost giving it a watery quality. The actors merge together into a mass of liquid light. At times, they disappear entirely. Film preserves nothing. Film saves nothing. Barrymore and Karloff are still dead. All that remains are the cinematic shadows left behind after their bodies have vanished.

The imperfections of the nitrate are what make the film beautiful. What has partially destroyed the film has also made it captivating.

I watch the film on my laptop, pausing when I want. I control the experience completely, and I think about how that almost creates a third film. I take screenshots by pausing certain scenes. Every time I pause the film, I capture a different frozen frame, each unique and unrepeatable. The screenshots I take will most likely differ from the screenshots taken by another person. We create our own set of images that we use to navigate the film and our memory of it.

The film itself seems to mimic memory–the blurring, the distortion, the incompleteness, the gaps, the gradual degradation, the loss of whole scenes.

The opening scenes are of a crowd gathered at a fair to see Karloff as the mesmerist. All their heads blur into one sepia smear. 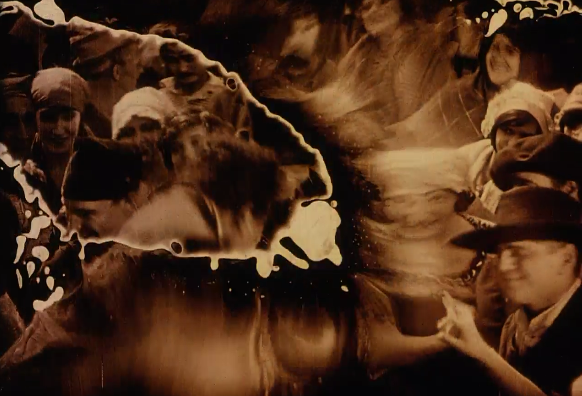 Some of the scenes are perfectly intact with few blemishes. Time is indiscriminate, leaving certain parts untouched.

Has someone already said that cinema is an art of ghosts? Watching early silent films, I think it is.

The murder scene is shown in flashback. Barrymore gets drunk with the Jewish man and sees a belt he’s wearing that is filled with gold. We know this won’t end well.

As the Jewish man is leaving, Barrymore seems so concerned about him, buttoning up his fur coat like a mother bundling up her child. Of course, it’s all a charade. He’s probably planning the murder in his mind the whole time.

The crime itself is committed outside during a snow storm. The scenes are tinted blue. At times, the screen is engulfed by snow. Barrymore attacks the man. Then, we see blood drops falling on the snow. Such a simple but poetic image. 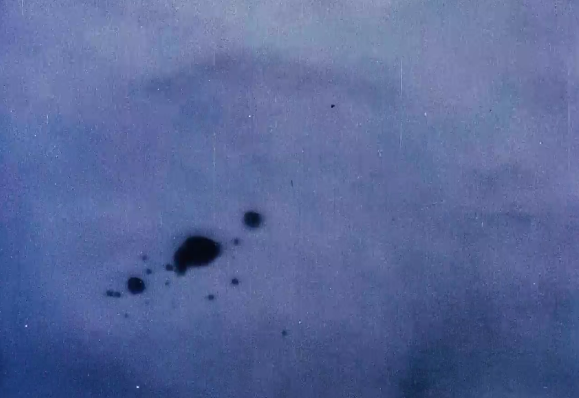 Barrymore drags the body to an incinerator. A shot of smoke and flames that resembles the earlier shots of the actors’ faces blurring. This is what the body is reduced to–blood on the snow, smoke in the air, a smear on celluloid.

The camera lingers on those flames, on the horror of them. It makes me think of all the early films lost to fire, how film is as fragile as flesh. 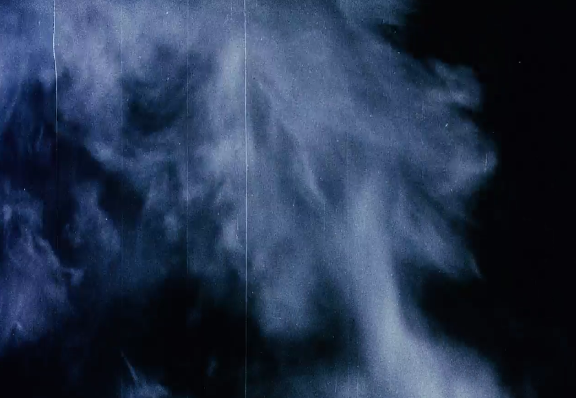 The blue of the murder scene is the blue of memory.

Barrymore visits a fortune teller, and the damage to the film intensifies. More distortion, more blemishes, the actors disappear.

It becomes a fire film. The reels seem to be combusting, erupting into flames. It’s not a film, it’s a conflagration.

Another scene where Barrymore is haunted by the man he murdered. His ghost appears and then melts away. The distortion takes over again, resembling the flames to which the dead man’s body was fed. 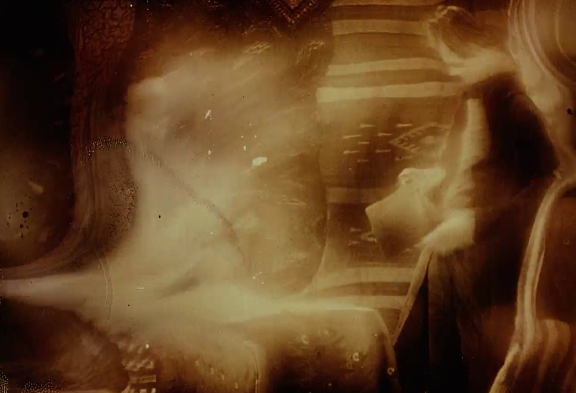 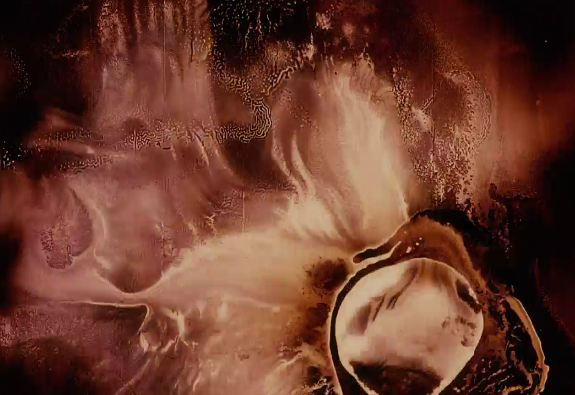 I’m reminded of Yves Klein’s Fire Paintings, how he put fire directly onto the canvas, usually as a woman laid on it.

An art of burning bodies.

A year later, in 2004, Morrison re-purposed another scene from The Bells to create a short film called Light is Calling. The nitrate print is even more degraded, but bits and pieces emerge from the distortions.

The pleasure and challenge of the film is catching the brief, recognizable parts that surface–a horse and buggy, a woman, a man.

I think of my own memories and how a face or an image will suddenly and momentarily rise out of the darkness. Gone before I can hold it. 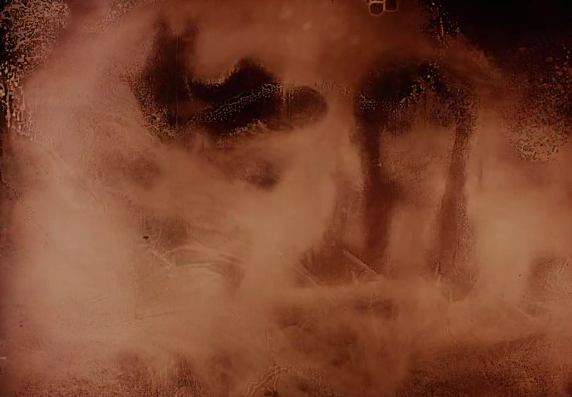 The viewer constructs the narrative with what they find. We are creating the film for ourselves.

It’s an unwatchable film that I can’t stop watching.

The actors are ghostly, ethereal. It’s like they’re in another dimension.

The film feels like a dream. I feel like I am dreaming it, or that it can only be a dream.

It was filmed with actors, but it looks more like an animated movie.

The swirling images remind me of the beautiful paintings that production designer Tyrus Wong created for Bambi. In his paintings, the animals are almost completely consumed by their blurry, dream-like environments.

When I glimpse an actor, I feel like I’m seeing a photograph rather than a film. They seem frozen, immovable, fossilized, suspended in amber. It’s a miracle that their faces have survived at all, that they haven’t completely disappeared from the film. 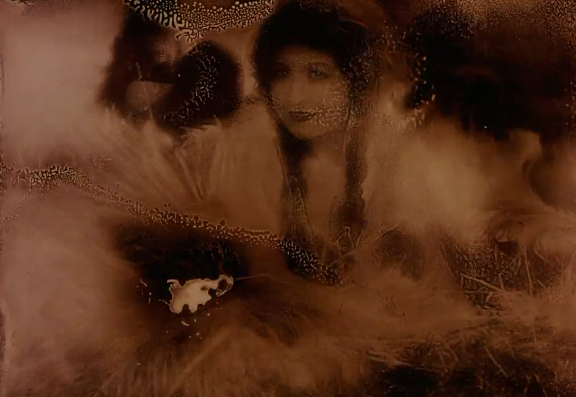 My experience of watching the film reminds me of how we always want to make order out of chaos. I want to find the human beings that live inside this disintegrating, unwatchable film. I search for them in the storm of splotches and scars.

In one scene, the man and woman are together. He has her arm. Is he forcing her to go with him? Is he kidnapping her? It’s impossible to tell.

They are both lost and not lost. Time has almost destroyed the film but not entirely. Their ghosts, their shadows, survive.