How does the southern silence become so heavy and so menacing so suddenly? How do the trees and the whole natural environment evoke so intensely death, blood, and the weight of history? How does the present call up the past? And how does this past, with a mere gesture or a simple regard, haunt and torment you as you wander along an empty cotton field, or a dusty country road?

In his seminal book, Between the World and Me, Ta-Nehisi Coates writes that “In America, it is traditional to destroy the black body–it is heritage.” The 1998 murder of James Byrd Jr. confirms Coates’s words. Byrd was attacked by three white supremacists in Jasper, Texas. They beat him, urinated on him, and then tied his body to the back of their truck and dragged him several miles down an isolated road. Over the course of the drive, Byrd’s body was literally torn apart; pieces of flesh and body parts, including Byrd’s head and arm, were strewn along the road. The three men finally dumped what was left of Byrd’s body at a black church. The murder sparked national outrage and condemnation. All three killers were convicted. Two of the perpetrators remain alive, while one was executed in 2011.

Around the time of the murder, Chantal Akerman planned to make a documentary about the American South. She admired the work of William Faulkner and wanted to explore the region. However, when Byrd was murdered, her attention immediately shifted and she chose to focus on his death. The subsequent documentary she made was called Sud (South).

Two aspects of Akerman’s philosophy as a filmmaker are crucial to understanding and appreciating South. First, in I Don’t Belong Anywhere: The Cinema of Chantal Akerman, which is a documentary made about her before she died in 2015, she talks at length about her intentions as a director. Akerman states that she wants viewers to feel time unfolding as they watch her films, to experience time rather than barely noticing as it passes. To this end, many of her films feature long takes and are filled with natural sound. 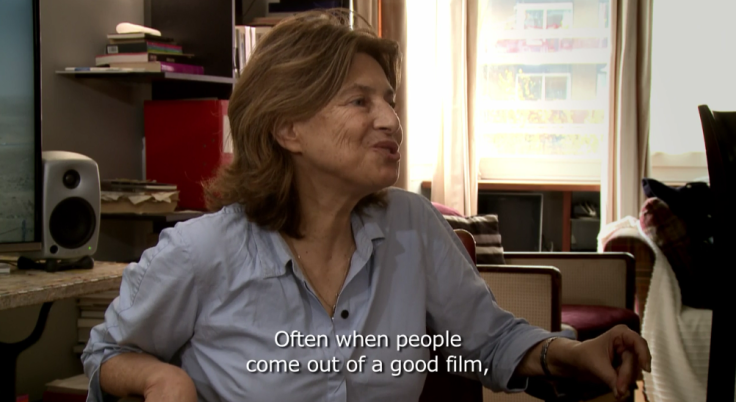 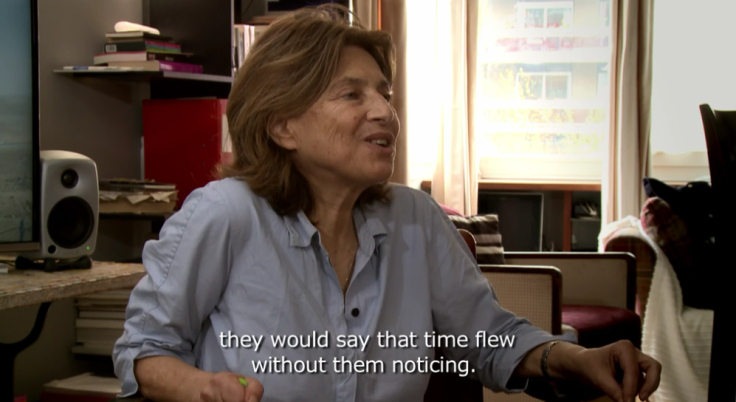 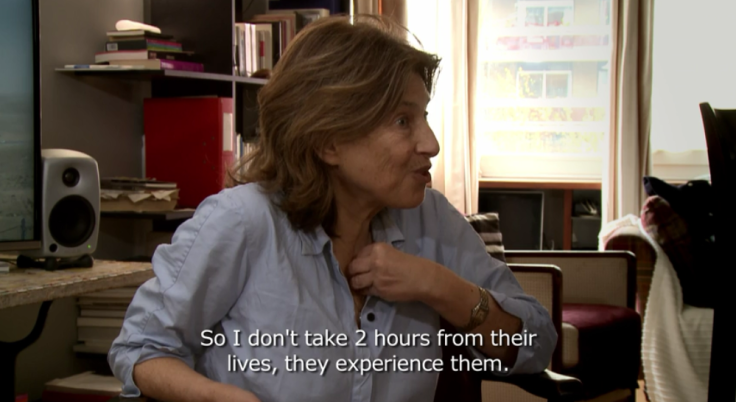 Second, Akerman believes that the Holocaust–an atrocity that her own mother survived–represented a kind of dividing point for cinema; it generated the idea that some things are so unimaginable, so horrific, that they cannot be shown. In keeping with this belief, Akerman’s cinema suggests, implies, and evokes. While a contemporary documentary or fiction film might use actors to recreate Byrd’s harrowing ordeal, Akerman withholds grisly simulations and refuses to reduce violence to a spectacle. 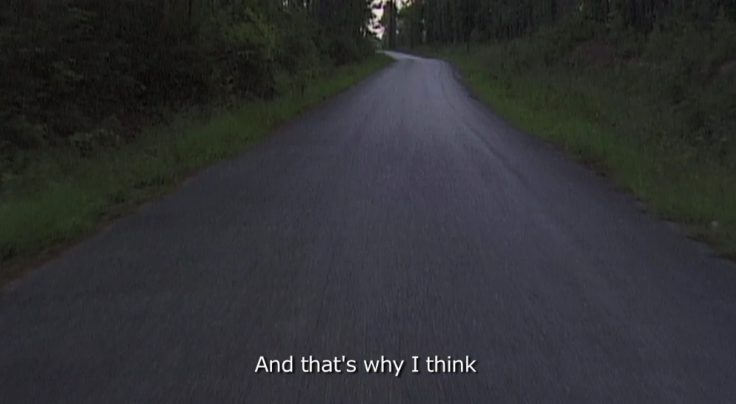 I am a Southerner. I was born and raised in North Carolina. I’ve made detours to the Northeast, but I am pulled back to the South because it is my home. And yet, to live here, is to perpetually grapple with the open wound of racism. There is racism across the United States, but the South has a unique relationship with it because of slavery and The Civil War. Since the botched Reconstruction, the South has struggled to deal with racism. That doesn’t mean progress hasn’t been made–there has been significant change due to the courageous actions of activists and everyday citizens–but inequality, injustice, and oppression persist.

On film, the South is often portrayed in a one-dimensional way that denies the region’s complexity and diversity. Akerman resists simplicity in her documentary. The long takes authentically immerse us in the world of the South. The film begins with a black man mowing the lawn of a Church, underscoring how important Protestant Christianity is to the region as a whole and to the black community in particular. From there, scenes appear–a black woman sitting on her porch on a sunny day, people walking down a street, long shots of verdant countryside and dilapidated trailers. Akerman captures the kudzu-covered forests, the crickets chirping at dusk, the low thrum of a train. These extended shots are crucial to submerging the viewer in a world where beauty and horror continually coexist, a world where a man could be dragged to his death by three white supremacists down an idyllic country road. 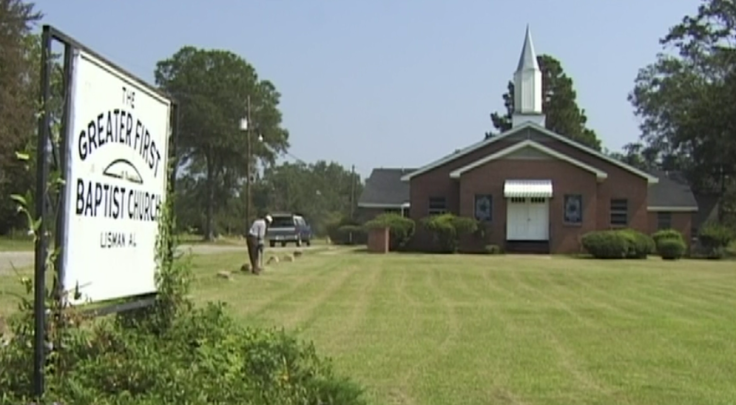 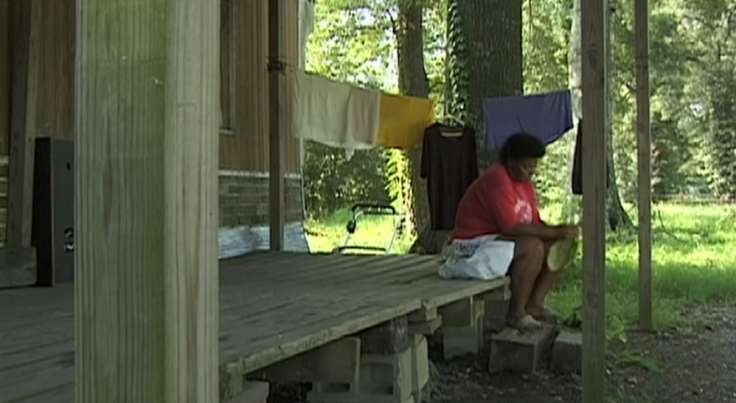 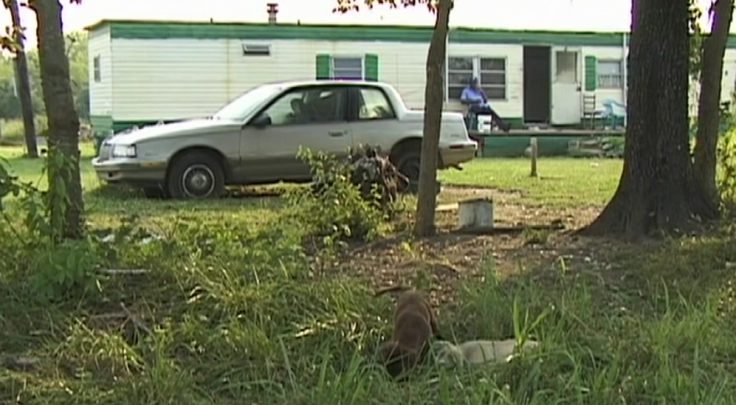 Interspersed throughout the film are interviews with various people, including citizens of Jasper, Texas. Their names do not appear on the screen. A black woman sits on a porch with her grandchildren and talks about how things have changed since she was a child. A black man, who lived on the road where Byrd was killed, recounts seeing bits of Byrd’s flesh on the street. A white journalist at the local newspaper details Byrd’s murder with little emotion. A white police chief or sheriff insists that much of Jasper’s problems are economic, not racial.

The documentary reaches a more personal depth as Akerman films parts of Byrd’s funeral at a church. The viewer sees the impact of Byrd’s death and learns more about him. Community leaders use the church pulpit to call for racial justice and unity. A black woman sings a powerful gospel song. In a poem, Byrd’s sister talks about who Byrd was as a person–how he loved music and had a good sense of humor. Another speaker says that Byrd visited the elderly and counselled young people. Byrd was a valued member of his community. His killers murdered him precisely in order to strike fear within that community. Byrd’s funeral is a time for gathering and grieving, but it’s also a time to show that black residents will not live in fear. 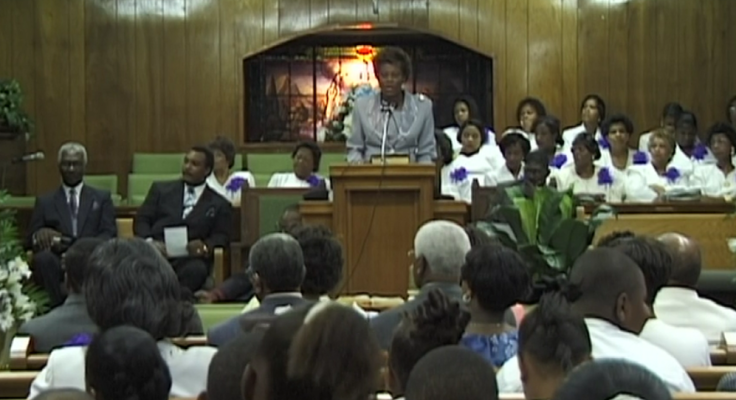 Finally, the end of South directly addresses Byrd’s murder. In a scene that lasts around eight minutes, Akerman points her camera at the road where Byrd died, taking the route that was followed as his body disintegrated, as he was literally destroyed. It’s one of the most unsettling and emotional scenes I’ve ever watched. The scene forces us to imagine for ourselves what that ride was like for Byrd. We are compelled to imagine the pain and terror he must have been feeling. We see the forests and houses that pass, we hear the crickets, we can almost reach out our hand and touch the evening air, so close and yet so far from understanding. How can we ever fathom such horror?

The filming of the road reminds me of Claude Lanzmann’s Shoah. Lanzmann didn’t use archival footage–like many directors tend to do–in his documentary about the Holocaust. Rather, he filmed the death camps as they looked decades later, lush with grass, hardly any traces left to indicate the atrocities that transpired. The last scene of South is similar. We see the road as it is in the aftermath; the only evidence that anything happened is the presence of the circles drawn on the pavement to mark where pieces of Byrd’s body were found. At one point, the circles become numerous, one after another, suggesting the rapid disintegration of Byrd’s body. Akerman does not attempt to recreate the atrocity. Instead, she films the remnants that say more than any reenactment ever could.

South is a challenging but essential film. Its difficulty lies in what it withholds and what it forces us to contemplate: the hate at the heart of humanity and what that hate can do to actual human beings. James Byrd Jr. was an ordinary man, a good man, a man who should be alive today. Racism killed him. The belief that it is acceptable to destroy the black body, as Ta-Nehisi Coates reminds us, is deeply embedded in the United States. We see it in the recent killings of Tamir Rice, Eric Garner, Philando Castile, and countless others. Racist  violence persists despite efforts to eradicate prejudice. As tragic as Akerman’s film is, what makes it even more difficult to watch is the fact that, 17 years after it was made, it remains painfully relevant.