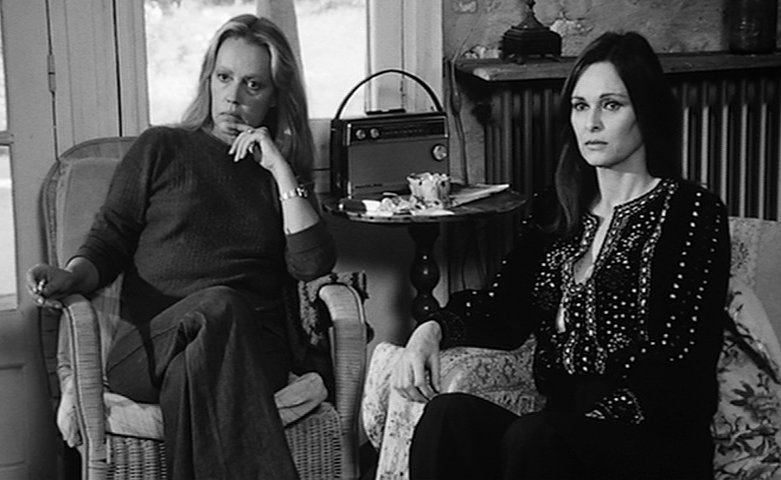 I wanted to render silence. A rich, living silence. Like something you might have been able to hear.

In my films I don’t gloss over or suppress those things that aren’t functional or organic to the expressive unity of the fiction—they are made up of a material that’s lacerated, superimposed, offset in time; there are gaps and breaks—that whole imaginary that’s meant to render the heterogeneity and irreducibility of life.

As for Jeanne, since the time of Moderato Cantabile I’ve been aware of the extraordinary intelligence in her eyes, the seriousness with which she entered into her roles.

This is my first real review for the website. The essays before this one were conceived for other reasons, before I thought of creating herheadinfilms.com, before I envisioned a space specifically for my film reviews.

How do I want to write about film? I’ve been thinking about this question for a long time. Films are not separate from my life; they are deeply embedded in it. I want to convey that embeddedness, the way cinema is intertwined with every aspect of my existence. I’m not sure how to do this. I’m learning as I go, creating a language that is my own and that makes room for the subjective, the emotional, the elusive.

I’d prefer for my reviews to be conceived in the afterglow of seeing a film. I’d like them to be personal, impressionistic, a blur of thoughts and emotions. I want to write intuitively, from the heart and in the moment. They might be rough around the edges, not so polished or perfect, but that’s okay. Often, I don’t know what I want to say before I start writing. I find my words as I write them. I discover my thoughts and feelings as they appear in the act of writing.

I wish I could write about every film I watch, but time won’t allow me to do that. However, I’ll write about as many films as I can, and, in the process, I hope to capture memories and parts of my life in these words so that I don’t forget them.

I watched Nathalie Granger on a Saturday. It was a particularly difficult day. I’d been crying so much that my eyes were burning. I wanted my eyes to do more than cry. I wanted to watch my first Marguerite Duras film. I’ve read many of Duras’s books: The Lover, The Ravishing of Lol Stein, her script for Hiroshima Mon Amour, her war diaries, several of her interviews. Duras is a crucial figure in my life, and her fragmented writing style is one that I admire and that I am inspired by. It seemed only natural to start exploring her cinema.

Nathalie Granger feels like a Marguerite Duras creation. It has the fragmented and non-linear narrative that characterizes her novels. I could tell that she directed this film. Her touch is all over it. It’s like her writing has come to life on the screen.

Nathalie Granger is a little girl who is so violent that she needs to be put into a different school. We’re not told much about Nathalie’s violent tendencies, only that she is aggressive towards other children her age and acts out. We never see her violence. In fact, she is rarely in the film. The film is really about Nathalie’s mother, Isabelle, (Lucia Bosé) and her close friend, an unnamed woman played by Jeanne Moreau. 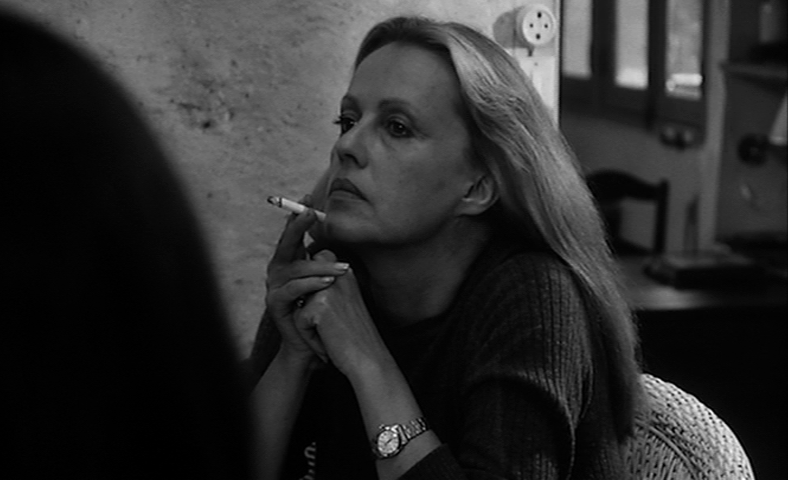 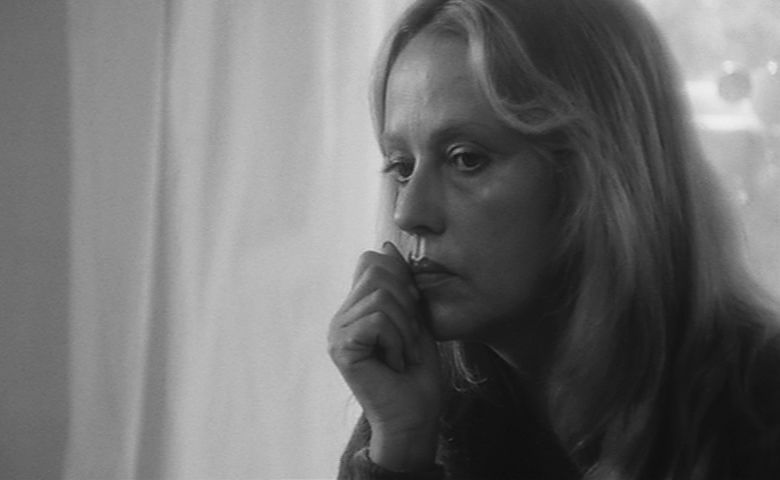 Like Duras, Moreau is an important figure in my life. She was present in many of the first art house films I ever watched. There was her vivacity in Jules et Jim, her sensuality in The Lovers, her yearning in Elevator to the Gallows, her addiction in Bay of Angels. In those films, she was glamorous and always defined by her relationship to men, whether it was the male directors who were in love with her or the male co-stars who fawned over her. In Nathalie Granger, she is just herself, wearing simple shirts and slightly-flared jeans. The style is more casual and natural. The two women are not sexualized or objectified by Duras’s camera. They are allowed to just be.

I rented this film through Netflix’s DVD service. As I held the DVD, I thought about the other people who had laid it beside their beds and then picked it up and watched it. I was touching something they had touched, and someone, one day, would receive the DVD I had touched and we would be connected in some small but unknown way. All these people watching one Marguerite Duras film.

Nathalie Granger is almost a silent film. The dialogue must have covered only a few pages of the original script. There are few words. Instead, there are looks and empty rooms. Much of the story takes place in one house. We see windows and couches and cats. We watch two women move through this domestic space. They clear the table after lunch and wash the dishes. They look out of windows, their faces and bodies are reflected in mirrors. Their day is punctuated by a radio broadcast that updates listeners on two teenage killers who have been caught by the police. Perhaps a reminder of what Nathalie could become one day if her violence escalates. Within this calm domestic realm, violence strikes in subtle ways–through the radio and the information about Nathalie’s outbursts. Nathalie’s mother, Isabelle, conveys a quiet turmoil; you can tell she is grappling with her daughter’s violence. She packs Nathalie’s clothes into a suitcase in preparation for the move to the new school, but, at the last minute, she refuses to let Nathalie leave. Nathalie’s fate is unresolved by the end of the film, perhaps implying that there are no easy solutions when it comes to dealing with a violent child, that the problem of violence itself is never easily solved. 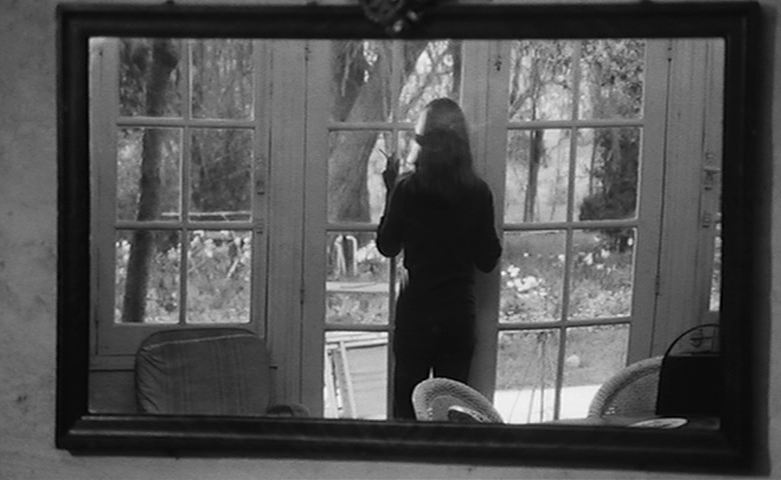 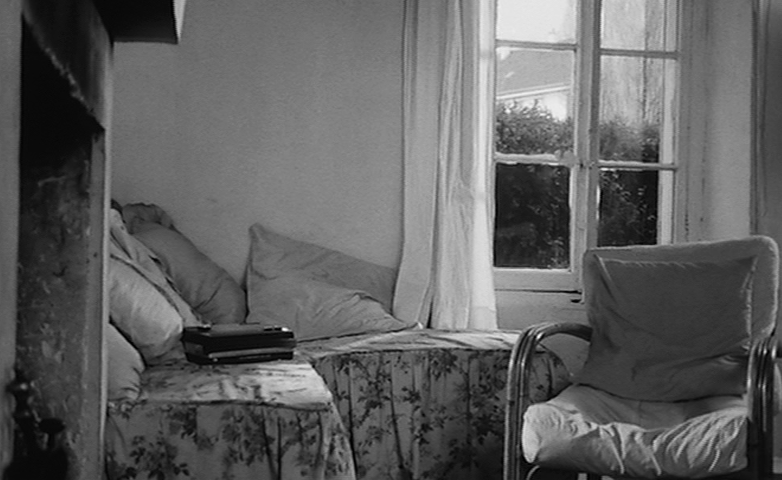 This film is only 1 hour and 20 minutes, but it took me hours to watch it. This always happens to me. I constantly pause films, maybe I want to prolong them. This film is slow and silent, the kind of film many people don’t like watching. They need action and plot, and I need those things sometimes, too, but I’ve increasingly opened myself to the beauty of meandering, meditative films that are more about immersing the viewer in a cinematic world that is slower and closer to everyday life. Nathalie Granger is populated by ordinary tasks performed by ordinary women who feel more than they can speak. Their silence is infused with meaning.

I didn’t mind spending a little over an hour in their world, watching them dry the dishes and look out of windows and play the piano. My mind drifted at times, but that’s okay. I think these films create a space for thinking; they inspire the mind to wander. The film isn’t trying to do anything or say anything; it simply is. It exists. It pulls us in without telling us what to think or how to interpret it. We make the film our own. I think what will stay with me most are those quiet moments that suggest the rich interior life of the women in the film.